Leading scientist Stephen Hawking has died this morning, after being named as a second scientist after Einstein, most of his work is in the field of Black Holes and Theory of Physical Cosmology.
According to the details, Stephen Hocking’s entire body had become extremely contagious due to the ‘complicated Nero Diesase’, which could not weaken it, but the technology of the world still conveyed the sound of their heart to the whole world. He made a very astonishing technique through which he used to convey his message.

The leading technology company ‘Intel’ has been working with Stephen Hocking for the past several decades, a system designed for Stephen Hawking, which was considered to be the eyes of his eyes. What to write to Stephen Hawking through this technology Only 15 or 20 percent of the share had to be told, after which the system used to estimate the remaining things and opened many plans.
The most surprising thing was that an infected detector was lying on Stephen Hawking’s cheek, whatever command he gave to the computer was given by the infrared detector, namely, Stephen looked at the ‘Keyboard’ open on his computer. When the move was stirring, the sensor quickly became active, which used to note this movement and convey the message to the computer. 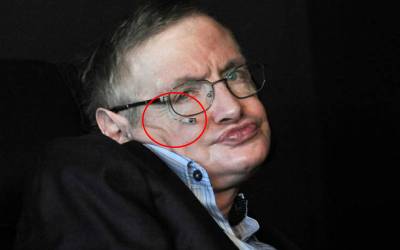 Stephen Hocking was able to deliver his messages to the people. This worker did exactly the same as our mobile phone works because when we bring closer to our face to hear the call of the cell, the sensor identifies our face Closes light while doing